The 3dpBurner firmware used up today date was based on a modified version of GRBL 0.9. The main reason was that it had a better performance for raster engravings than GRBL 1.x.

At today date, the "new" GRBL has reduced these differences, up to the point that although there is still some ones, it no longer makes sense still stuck in v0.9 vs the new features and more compatibility with others third party applications.

Parallel to these GRBL 1.1 improvements, LaserGRBL application was born some years ago. It now combines and improves all the "3dpBurner Sender" plus "3dpBurner Image2Gcode" features in a single one, including cool and new ones.

It is the free, open source and still in continuous development, so i reccomend to use this one for control the 3dpBurner instead the "old" 3dpBurner Sender and 3dpBurner Image2Gcode. After some tests you will find a simple and very powerfull software.

If you don't use it yet, I highly recommend to take a few minutes and read the full USAGE on his website, test and explore its features. Its a nice work.

How to upgrade to GRBL 1.x

-Make sure you can connect to the machine, then disconnect.

-Select Arduino UNO as target and the latest GRBL version (Original, not the XY Homing one).

After finished, it is recommended to connect to machine and type $RST=* on the manual command text box and press Enter (this will wipe the GRBL EEPROM values).

Then go to "File/Open File" and load this configuration file, then press the Run button, this will execute the file and set the 3dpBurner parameters into GRBL EEPROM, if you get any error repeat the configuration process until 0 errors.

If you need to fine tune any parameter, like maximun axis rate or acceleration you can go to "Grbl" menu and click "Grbl Configuration". Modify your values and press "Write."

I created some custom buttons for laserGRBL, check downloads page.

Download source and check the GRBL documentation about how to compile and upload GRBL to Arduino.

NOTE ABOUT ENDSTOPS AND HOMING: Due most users don´t use homing function and this causes headaches for inexperienced users i decided to move the homing function to addons section. Now the standard 3dpBurner assembly will no include the endstops switches, leaving them as optional. So you can omit the physical endstops and wires.

If you want to use homing or endstops capability you need to build a new GRBL binary instead to use the "firmware update" menu of LaserGRBL, please check the addons page for that.

Under long time working or when over tighten the belts the previous tensioners could break. These parts has been updated and should be used as replacement if you experience that.  Also the bridge idler mount has been reinforced for a longer endurance. Files has been updated. 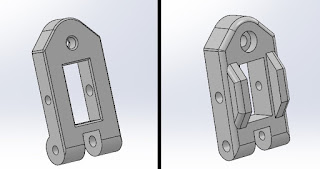 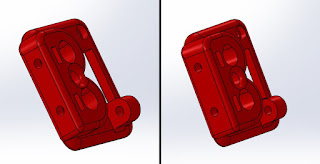 File added to the thingiverse link and also to emailed links. 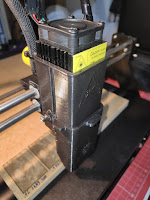 I also created 3D printed "extraction hood" for fumes, I use it in conjunction with standard in-line kitchen extractor and a clothes dryer flex tube (diameter 100mm). 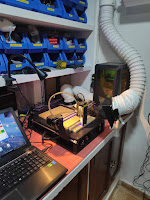 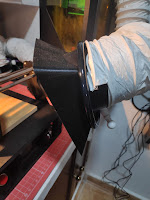 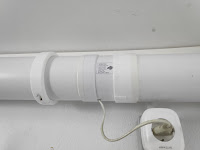 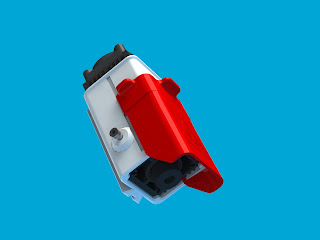 A module adapter for 33x33 heatsinks has been released. Files has been updated and you can found it under the AddOns folder. However you can also download them from here.
The same two M3x10 bolts and M3 nuts are used for fitting the module. 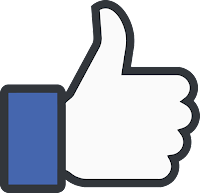 Due to the 3dpBurner fragmentation support (Thingiverse comments, some third party pages...). I have decided to create the official Facebook Group, where users can contributing by sharing experiences, builds, mods, and help.
The goal is to concentrate the project support in a single official site with actively contributions and the news.

Come in and get comfortable. Relevant news soon :)...